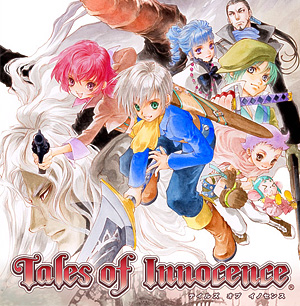 Who are the people you surround yourself with? Are they the friends of who you are now, or the enemies of who you once were?
Advertisement:

Tales of Innocence is the ninth mainline entry in the Tales Series. The game was released on December 6th, 2007 in Japan on the Nintendo DS. It was developed by Bandai Namco and Alfa System.

Beneath a foreign sky, the mighty Sensus general Asura leads a charge against the armies of Ratio. His goal is to acquire the Manifest, an incredibly powerful artifact that can unite the heavenly domain of Devaloka and the earthly plane of Naraka into one paradise... or destroy both.

Finally, the battle comes down to a duel between Asura and the Ratio general, "Reaper" Hypnos. Asura uses his trusty blade, the intelligent Holy Sword Durandal, to slay his opponent, and with his last breath Hypnos swears to judge the results of Asura's campaign in another life.

This is the recurring dream that a timid young schoolboy called Luca Milda has been having, a dream where he is Asura leading his armies against Ratio. He lives an ordinary life in the kingdom of Regnum, preparing to one day inherit his father's merchant business. The city is abuzz with talk of the government tracking down and arresting "Avatars": humans who have begun to suddenly develop supernatural powers.

As Luca is walking to school one day, he runs into a girl called Iria Animi, an Avatar being chased by Regnum soldiers. She implores Luca to help her, and although Luca is not a fighter, when he picks up a weapon his own Avatar powers awaken, allowing him to destroy the soldiers with frightening ease. The name of "Asura" echoes in his mind...

The story is an exploration of identity. Each party member must grapple with their true nature: is it the person they grew up as, or the heavenly being whose memories they possess? Should Luca trust his allies as the friends he knows now, or should he remember them as enemies of Asura? What forgotten events transpired after the battle between Asura and Hypnos, and what happened to the Manifest?

Amidst all of this, chaos erupts as people across the world awaken to their "true" nature as warriors of Sensus or Ratio, threatening to reignite the ancient war. Then there's the cult of Arca, led by a mysterious masked woman called Mathias who seemingly wants to destroy the world, and the rebirth of a sinister figure known only as "Overlord".

The game's combat system, the so-called Dimension Stride LMBS, is a fusion of Tales of Destiny Remake and Tales of the Abyss, and focuses on fast-paced action and nigh-endless comboing. The engine uses the same plane-of-motion control as Tales of Symphonia, but with the added option of free-run, making the fighting intuitive and versatile.

The title received a Video Game Remake for the Playstation Vita called Tales Of Innocence R on January 27th, 2012, exclusive to Japan. It featured a revised script (which included more insight into the events of Asura's era), updated graphics, a new opening song, a redesigned battle system and two brand new characters: "QQ Selezneva", a spirited archaeologist, and "Kongwai Tao," a quiet spellcaster who dislikes disputes. Yet again, Baba stated they are not exporting this version outside Japan.

Tropes presented by Tales of Innocence: