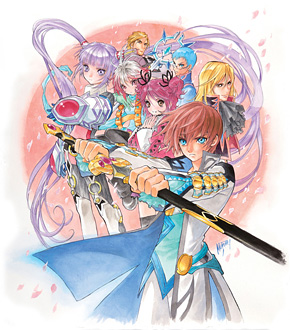 I wish that two hearts could be one.
Advertisement:

Tales of Graces is the twelfth mothership game in the Tales Series, and was released in Japan for the Wii on December 10, 2009.

The fantasy world of Ephinea is driven by a magical power called Eleth, which can be crystallised and stored in a substance called Cryas. The largest of these Cryas are called Valkines, around which three great nations have been established: the arctic stratocracy of Fendel, the desert republic of Strahta, and the blossoming kingdom of Windor. For generations, the three countries have struggled over the limited supply of Cryas in the world, with their prosperity directly tied to the amount of Eleth they control.

Asbel Lhant is the eldest son of the Lhant family, a prestigious feudal line who control the "Lhant" region of Windor. He used to be a normal kid who spent his days playing around and going on reckless adventures with his friends; that was, until the day one of his friends committed a Heroic Sacrifice to save his life. This tragedy awoke within Asbel the desire to gain enough power to protect everyone around him, including all of the citizens in his future protectorate.

With this goal in mind he leaves home, joining the military and training to become a dedicated and respected knight. However, on the cusp of graduation he receives some devastating news: his father, Lord Aston, has died. Giving up on his dream and quitting the military, Asbel returns home after seven years to take his father's place as the ruler of Lhant. However, he finds not only a heavier burden of responsibility than he ever imagined, but that the past friendships he held so dear have shattered in his absence.

An Updated Re-release for the PS3 called Tales of Graces ƒ was released in December 2010 (later released in America in March 2012 and in Europe in August). The game includes the usual array of upgrades like new skits, scenes, abilities and Mystic Artes. By far the biggest addition is an epilogue story called "Lineage and Legacies", which adds Richard as a fully-playable character. The party also gains an Overlimit-like ability called "Accelerate Mode," which grants unique powers to each character and gives them access to a powerful Finishing Move.