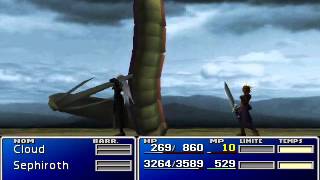 Who cares if he's the villain? This is AWESOME!note  Would be more awesome if you could actually control him during this sequence though...
Amalia: The situation requires I accept such help as I find. Though it be from thieves. I shall accompany you until we find my companions. No longer.
Balthier: Let's think of her as a 'Guest', then. Unlike Fran or myself, our 'Guest' probably won't be taking orders from anyone anytime soon. And she'll leave when she pleases. So, we keep to our affairs, and she to hers.
— Final Fantasy XII

This is a character who joins the Player Party only temporarily. If this happens early in the game, they'll be much more powerful than you. If you're lucky, maybe you can unequip a Disc-One Nuke from them. But if you buy them equipment, beware of So Long, and Thanks for All the Gear! Sometimes, this is averted with Stuck Items applied to all their equipment.

If you see them again, it will probably be as an enemy; however, if they join your party again, they will seem a heck of a lot weaker. Unfortunately, what removes them from your party may well be their getting killed after you've gotten used to having them around.

Despite there being little incentive to keep this character in your party for gaming reasons (lack of weapons sold for them, etc.) it's popular in gaming fandom to force these characters back into your party via cheat codes or GameShark.

Compare with Crutch Character, Optional Party Member, 11th-Hour Ranger, and Awesome, but Temporary. Contrast And Now for Someone Completely Different, where an existing party member takes over as the viewpoint character temporarily. May often also be a Hero of Another Story.