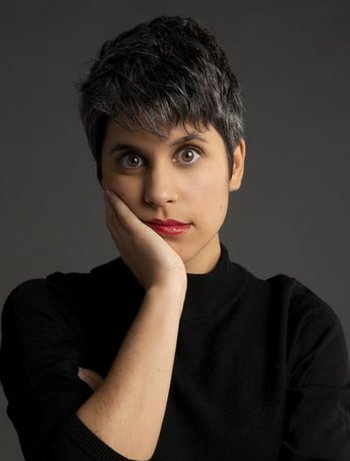 Hey Ash, who ya playin'?
Advertisement:

Ashly Syble Burch (born on June 19, 1990 in Phoenix, Arizona) is an actress, voice actress, and writer from California. She got her start in, and is well known for, her roles in Hey Ash, Whatcha Playin'?, and roles in other works like the Borderlands series, Adventure Time, and Attack on Titan. She received universal acclaim and earn an "Best Gaming Performance" award as both Chloe Price in Life Is Strange and Aloy, the protagonist of the Action RPG Horizon Zero Dawn. In 2019, she joined the main cast of Final Space. In 2020, it was confirmed that she would play the titular role of Molly McGee in The Ghost and Molly McGee. Since 2016, she has been a frequent guest star on Critical Role.

Since 2020, Burch has starred as Rachel in Mythic Quest: Raven's Banquet, and additionally serves as a staff writer and the show's story editor.

She is half-Southeast Asian (her mother is from Thailand).