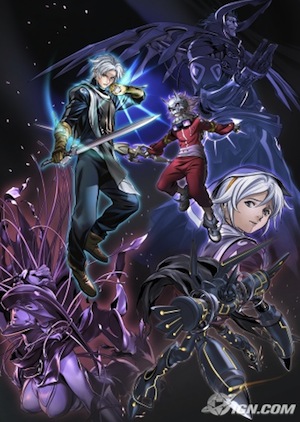 "In its most desperate hour, the world awaits the arrival of its new Song Summoner." -The trailer
"OK, let's make a man from this jam!" -Groove Master
Advertisement:

The story follows the adventures of Ziggy, as he tries to save his baby brother Zero from the evil Number 42 and his Machine Network. Along the way he gathers a huge group of Tune Troopers, as well as Robot Boy Z.E.R.O and a quintet of unique, superior troopers, the so-called Superstars.

Oh, and did we mention it's an iPhone, iPod Touch, & originally classic iPod exclusive?

The gimmick of this game is that every individual Trooper Ziggy summons is created from a specific song in your library, and levels up as you listen to that song, so instead of the typical XP grind, they level up naturally as you listen to music.