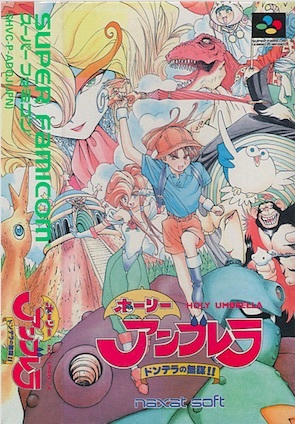 Holy Umbrella: Dondera no Mubou!!Translation loosely, "Dondera's Unhinged!!" is an Action RPG-ish game (or "comical action game," as the Japanese blurb on the back cover describes it) developed by Earthly Softnote a small Japanese company that apparently spun off of Tecmo and later became known as Earthly Production for the Super Famicom and published by Naxat Soft in 1995. The characters were designed by Tatsuya Egawa, of Magical Taruruuto-kun and Golden Boy fame. A Fan Translation patch was released by Aeon Genesis in 2009.

It all begins on a rainy day when one schoolboy picks up an umbrella. Suddenly he's transported into a fantasy world whose peace is being threatened by the Dondera Army. It's up to this boy to discover the powers within the umbrella and use them to (of course) save the world.