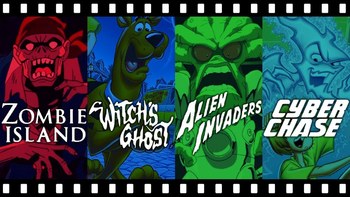 Scooby-Doo has been around since 1969. It has obviously had lots of TV series, movies, and even some video games. This sub-page focuses on the single largest chunk of it (at least by number of titles): the Direct to Video film series.

By 1998, the venerable franchise had become moribund: although multiple incarnations of the TV series were airing in syndication (as they had for decades), nothing new had been made since Arabian Nights in 1994. The output of Hanna-Barbera at the time had been highly reduced under Turner, and most of the funding was going to the shows Cartoon Network Studios was making within the larger company. Similarly to what was created with Jonny Quest: The Real Adventures, the time was right to tap into a new era for the studio's best-selling property, in collaboration with Warner Bros. Animation, whom eventually absorbed Hanna-Barbera (and Cartoon Network Studios branched off as their own unit). The first fruit of this was Scooby-Doo on Zombie Island (though that project had its genesis as an unmade episode of SWAT Kats). This movie kick-started a complete revival of the franchise over the next several years – three animated TV series, two live-action theatrical films, two live-action TV-movies, and at least one new Direct-to-Video cartoon per year each year since 1998 (it averages out to about one every nine months).

Cartoon Network is owed some gratitude for helping air a lot of these upon their first arrival, especially with the first few installments of this series.note They've strayed a lot from this over the years, some not airing on Cartoon Network and Boomerang for over a year after release. Nowadays, they're no longer aired on the former at all, but regularly air on the latter on 3 or 4 days every week.

As of late, there have been thirty-three entries in this series, spread across four style development eras.

For the Lego movies, see Scooby-Doo Direct-to-Video LEGO Film Series. See also SCOOB!, which was originally intended for theaters (and thus is not part of this series) but instead released on digital platforms due to the COVID-19 Pandemic.

Here are all the Direct to Video films:

The films overall commonly provide examples of the following tropes: