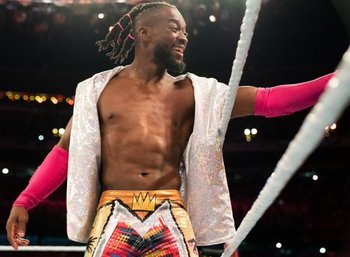 I Can Fly.
"Ya destiny is mine."
Advertisement:

Kofi started his career in WWE as a member of its iteration of ECW, with the gimmick of a laid-back Jamaican wrestler who could nevertheless put a serious hurting on the other guy when the chips were down. He became popular enough to go to the main series RAW and Smackdown, where he had a pretty-successful run as a midcard face for years, racking up title wins and feuds with Chris Jericho and Randy Orton.

He joined The New Day in 2014, turning heel for the first time ever, but quickly switching back to being a good guy as the group exploded in popularity. For years, he was the impressive, athletic Lightning Bruiser of the group, and the one that both Big E and Xavier Woods openly campaigned for getting an opportunity at the WWE title, but it never quite came...

...until 2019, wherein after an absolutely show-stealing performance at Elimination Chamber 2019, it became the New Day's mission to get him a title shot, believing that after 11 years in the 'E, he had more than earned his chance to go for it in one-on-one competition.

Naturally, he encountered plenty of resistance from then-champ Daniel Bryan (who believed he didn't have the moral fortitude to be a champion worth praising) and Vince McMahon (who believed he didn't have what it took after years as a tag team wrestler). Kofi fought and clawed his way all the way to the Wrestlemania 35 main event, where he won the WWE Championship for the first time, to the adulation of everyone, and capping off what became known as Kofimania.

He is a one-time WWE Champion

, a 15-time WWE Tag Team Champion (winning every variation of the titles: once with CM Punk, once with Evan Bourne, once with R-Truth and 11 times as part of The New Day), the 30th WWE Triple Crown Champion, and 20th WWE Grand Slam Champion.

Not in any way related to Eddie Kingston.