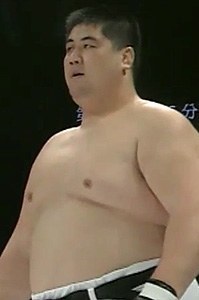 Koji Kitao (b. 1963-2019) was a Japanese sumo wrestler and Professional Wrestler, as well as occasional Mixed Martial Arts fighter. He started in the sport of sumo and performed well enough to be considered a top rookie, eventually rising to the status of yokozuna or great sumo champion at only 23, under the name of Futahaguro. However, the decision was badly seen by some pundits, and it did backfire when Kitao got involved in a scandal with his master and his wife, in which Kitao supposedly attacked them. He was expelled from the rank and left sumo altogether, deciding to move into professional wrestling after some TV activity. Kitao trained in New Japan Pro-Wrestling and debuted as a dubious but nonetheless hot prospect, receiving an unusual push. Then again, Kitao's short-temper got him against famous backstage bully Riki Choshu and he was fired from the company. Koji then fell into the promotion of his friend Genichiro Tenryu, Super World of Sports, only to crash literally the entire company by causing a scandal with John Tenta in which Kitao shouted wrestling was fake. This finally had Kitao out of the radar for a time, until he returned to the public life repenting for his past wrong decisions and having became a martial artist. Kitao had a dip in shoot-style in UWF International and reunited with Tenryu in his next company, Wrestle Association R. He also founded a dojo and competed in some MMA matches, and helped to draw for WAR until his retirement in 1998. Five years later, Kitao featured a shocking return to sumo when a fellow sumo investigated his case and concluded that Koji's master had exaggerated his misdeeds to get him fired for money affairs. Kitao then became a sumo trainer and stuck into the role until 2013, when his bad health forced him to retire.
Advertisement:

On March 29, 2019, his wife announced that Kitao had died on February 10 from chronic renal failure at the age of 55. Kitao, who had lost his sight, part of his memory and the usage of his legs to diabetes years before, had tried to commit suicide several times in order to not be a load for his wife and daughter. The latter, as a curiosity, is stage actress Harune Yukishiro.

He also played the sumo fighter in Jean-Claude Van Damme's The Quest.