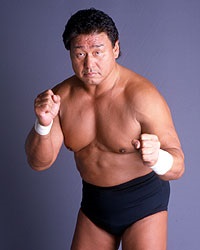 Genichiro Shimada (born February 2, 1950) is a Japanese sumo and Professional Wrestler and promoter, better known as Genichiro Tenryu. He started as a sumo wrestler at the age of 13 and competed for 13 years. All Japan Pro Wrestling's Giant Baba sent Shimada (Tenryu was his Shikona, or ring name, in Sumo) to train with the Funk Brothers (Terry and Dory Jr.) in their Amarillo, Texas promotion. Tenryu debuted against Ted DiBiase in 1976. After some time in the AJPW undercard and a brief run in Jim Crockett Promotions, his career started picking up in the 1980s. He is the second wrestler (Big Van Vader was the first) and the first native-born one to win both the All Japan Pro Wrestling Unified Triple Crown Heavyweight Title

with The Road Warriors. Tenryu and fellow former sumo wrestler Koji Kitao defeated Demolition (Smash and Crush) in the team's last-ever PPV match, at WrestleMania VII in 1991. Tenryu also was in the 1993 Royal Rumble and, as a hired gun for Mr. Fuji, was one of the ten wrestlers who attacked The Undertaker during his casket match with WWE World Heavyweight Champion

Yokozuna at Royal Rumble 1994. (He also competed in the Rumble match itself.) He was inducted into the Wrestling Observer Newsletter Hall of Fame in 1996.

His list of symbolic achievements is pretty long: he is the only Japanese wrestler who ever pinned both Giant Baba AND Antonio Inoki, the only wrestler in being a consistent top draw player in almost all the known puroresu promotions (hence his nickname "Mr. Puroresu"), the only founder whose wrestling promotion closed by itself and not due to money troubles, and finally one of the oldest wrestlers to retire (65). He might be the trope namer for a pro wrestling version of the Six Degrees of Kevin Bacon.