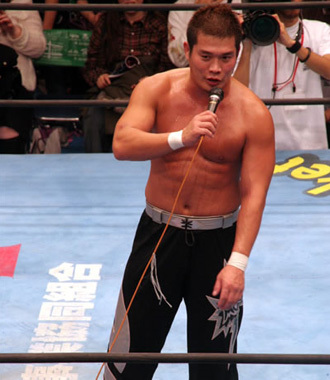 Masaaki Mochizuki (b. 1964) is a Japanese Professional Wrestler, best known by his work in Toryumon and Dragon Gate. Originally a Karate fighter, he fell in love with professional wrestling thanks to Nobuhiko Takada, becoming a shoot-style wrestler under Koji Kitao and debuting as part of his entourage in Genichiro Tenryu's Wrestle Association R. After building some career in WAR, Battlarts and New Japan Pro-Wrestling, he landed on Último Dragón's Toryumon circuit, which soon became his home. Masaaki was initially a sore thumb in Toryumon, a stern shooter who preferred to kick people in the head rather than playing their lucharesu game, and this was his gimmick for most of the conflict between the babyfaces of the company and the heel faction Crazy MAX. However, one day Masaaki decided he was tired of everybody, so he recruited two anarchists named Yasushi Kanda and Susumu Mochizuki (no relation) and created M2K, the nastiest stable in all the promotion. Their presence and wild attacks ended up turning Crazy MAX into heroes, and this gave birth to a gang war that lasted through years and eventually outlasted Toryumon itself, leading to the birth of the new company Dragon Gate. Mochizuki has remained one of the promotion's aces from then, trusting on his experience and toughness to teach respect to the new generations, and that's what he does now.