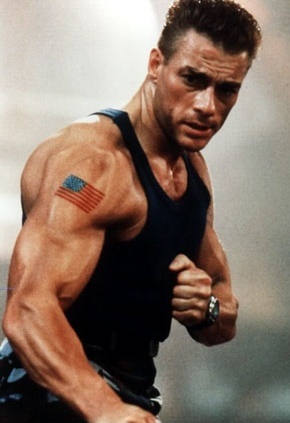 Prepare yourself for a groin attack.
"I love challenges. If you don't have any and can do whatever you want, then it's probably time to die."
Advertisement:

Nicknamed "The Muscles from Brussels," he was a hot darling during the advent of 80s and early 90's Summer Blockbuster action films, before Jackie Chan and Jet Li took center stage in America.

Before venturing into films, he had a career in the martial arts competitions. He also did some bodybuilding and studied ballet for five years.

Starting with couple minor roles in Breakin', Monaco Forever and Street of the Damned, his first major role in movies was Ivan, the champion of the villains in No Retreat, No Surrender. He later found his Star-Making Role in Bloodsport, which highlighted his legitimate martial arts skills along with his flexibility (a man being able to do full leg splits is fairly rare).

His early films tended to recycle certain plot elements, like his character unknowingly having a twin brother or attending a martial arts competition for the sake of a fallen friend.

He's the father of three children: Kristopher (born 1987), Bianca (1990) and their half-brother, Nicholas (1995). He has been married five times to four different women (Gladys Portugues twice, mother of his oldest two children, who's his current wife). His children have all taken up acting too, while middle child Bianca has followed him into martial arts too.

Tropes applicable to the man: