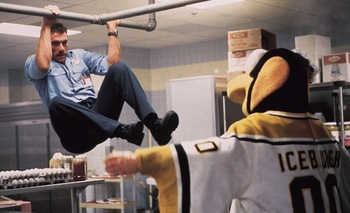 Action goes into overtime. And yes, what you see in this picture actually happens in the movie!
This is the story of Sudden Death
Starring Jean-Claude Van Damme
A pretty awesome movie about terrorists and hockey
Jean-Claude Van Damme!
— Andy Dwyer singing about this movie, Parks and Recreation
Advertisement:

The story is about Darren McCord, a Pittsburgh fire marshal who is on duty during the seventh game of the National Hockey League Stanley Cup Finals. During the game, he uncovers a terrorist plot to hold its attendees—including his own kids, and the Vice President of the United States—for ransom.

A remake, Welcome to Sudden Death, was released Direct to Video in September 2020. Directed by Dallas Jackson and with Michael Jai White in the lead role, it centers around a different sporting event (a basketball game) and features a more comedic take on the plot. It drew largely negative reviews and has seemingly put the franchise on ice.

Tropes in Sudden Death include: