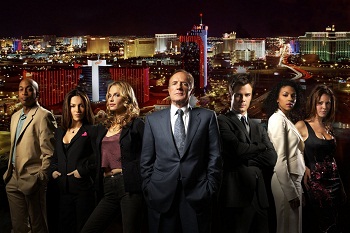 The cast from season 1. From left to right: Mike, Sam, Delinda, Ed, Danny, Nessa, and Mary.
If you're looking for information about the city itself, click here. Also not to be confused with the CBS series Vega$.
Advertisement:

Running from 2003 to 2008 on NBC, Las Vegas was an hour-long drama that depicted the professional and personal lives of the employees of the Montecito Hotel and Casino in Las Vegas, which was based loosely on the Mandalay Bay building. The show underwent several retools during its five-year run, usually referenced in-universe as the casino changing ownership (a few of the owners were portrayed by Dean Cain, Lara Flynn Boyle, and Tom Selleck). James Caan and Nikki Cox left at the end of the fourth season (Caan to return to films; Cox, it was rumored, due to budget cuts) and Selleck was brought in as the new owner. Ratings, however, had never been stellar, and combined with the high costs of filming and the 2007 Writer's Strike, led the series to be cancelled with a Cliffhanger series finale. Creator Gary Scott Thompson at one point wanted to do a TV movie that would tie up the numerous loose ends of the finale, but as yet nothing has come of it. Reruns currently air on E!.

Ed Deline (James Caan) - The Head of Surveillance and Security at the Montecito, Ed was a no-nonsense ex-CIA agent who had the respect (and fear) of most of the old guard in Vegas, as well as virtually all of the new establishment. He was soon promoted to President of Operations, and became responsible for the day-to-day running of the casino.

Danny McCoy (Josh Duhamel) - The central character of the series, Danny was a former Marine and childhood friend of Mary, who worked at the Montecito as a member of the Surveillance and Security team. When Ed became President of Operations, Danny was promoted to Ed's former job of Security head. The show started off with him giving voiceover explanations about what was happening, but this was quickly dropped part of the way into the first season. In the fourth season, Danny and Delinda got together and Delinda got pregnant, and in the fifth season, he was promoted to Ed's old job as President of Operations.

Mary Connell (Nikki Cox) - The Montecito's Special Events Director, who was responsible for planning and organizing conventions, weddings, and any other events taking place at the hotel.

Sam Marquez (Vanessa Marcil) - The Montecito's Casino Host, responsible for drawing "whales" (rich clients who gamble large amounts of money) to the casino and doing everything she can to keep them happy and betting.

Mike Cannon (James Lesure) - The Montecito's Head Valet, Mike is actually a genius graduate of MIT who moved to Vegas for the adventure. After Danny is promoted to Head of Security, he brings Mike upstairs as a member of the Security team. In the fifth season, the recently promoted Danny makes him head of Surveillance and Security.

Delinda Deline (Molly Sims) - Ed's daughter, Delinda becomes the Entertainment Manager of the Montecito, overseeing the running of the casino's clubs, restaurants and shops. She has a short-lived affair with Danny at the beginning of the first season, but they later fall in love and get back together.

Nessa Holt (Marsha Thomason) - The Pit Boss of the Montecito, she oversees all betting on the floor and monitors the tables to ensure there is no cheating. Her father was a CIA agent who worked with Ed, and after his disappearance, Ed took her in and raised her like a daughter. She is of course very close to Ed, and she and Delinda consider each other sisters.

A.J. Cooper (Tom Selleck) - A Wyoming cattle baron who buys the Montecito at the outset of the fifth season, little becomes known about him except that he is a former Marine and claims he got into the hotel/casino business because he wanted to learn about it. He prefers being called "Cooper" instead of "A.J.", is prone to shaking things up at the Montecito, and has a mysterious connection to...

Piper Nielsen (Camille Guaty) - A new character introduced in the fifth season premier, Piper is a Concierge, focusing on getting the guests whatever they want (separate from Sam, who only worries about her whales).