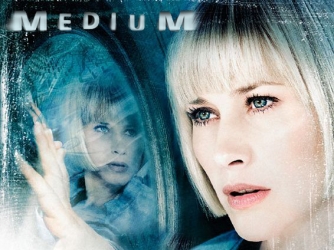 Medium is a TV show set around the character Allison Dubois (Patricia Arquette), who is a psychic. She has the ability to see dead people, and often has dreams of the future or the past. She's also the mother of three young daughters, who are developing psychic abilities as they grow up. Her husband Joe (Jake Weber) is the suffering normal person of the family, having to deal with all this while trying to succeed at his job in aerospace engineering.
Advertisement:

Allison works as an intern in the office of District Attorney Manuel Devalos (Miguel Sandoval). He comes to believe in her abilities, and approximately Once an Episode she helps solve a murder or other criminal case. Even with psychic powers there is still some drama and mystery, because dreams are often cryptic, dead people sometimes lie, and psychic evidence is not admissible in court.