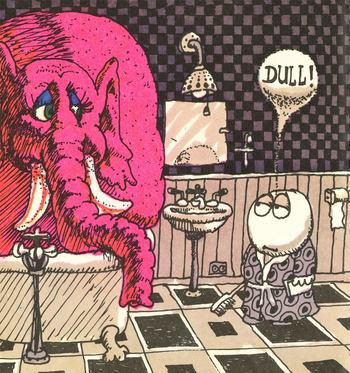 "Thank you so much for the new socks. They're right warm and a snug fit. Yeah, I'm doing well. Although this war has grown a little wearisome. Nothing much interesting ever happens these parts. Today I landed a Nazi helicopter on a nicked Nazi nuclear submarine aircraft carrier. After which I donned a deep-water diving suit, swam down an abyssal trench in the middle of the Atlantic fucking ocean, don't mean to bother you with the details. Long story short, I'm in a secret vault full of things so magical and abnormal in nature the mind has no recourse but to shudder in bewilderment. 'Course I'm accompanied by a Nazi-killing lunatic and some kind of genius wizard who claims to be on a first-name basis with God Almighty himself. Ah, well, we can only hope for a more stimulating turn of events in the future. Give my love to everyone back home, Fergus out."
— Fergus Reid, Wolfenstein: The New Order
Advertisement:

A specific type of Token Human, The Unfazed Everyman is an ordinary human with no special powers, who happens to hang around with aliens, time travellers, espers or wizards, and assorted other weirdos. Unlike most of their kind for whom such oddbods are invisible, Unfazed Everymen have a great capacity to cope with and accept the incomprehensible wackiness that surrounds them; in many cases with a wise and rational demeanor. Generally, they are in there so that the audience has somebody to relate to. Commonly the main character, and may be a Fish out of Water or/and an Unlucky Everydude. May or may not be played up as losers. They've probably been dragged into this by a Magnetic Plot Device, and usually used to it, such that everything they see only causes a Dull Surprise at most. Expect them to become Pals with Jesus.

If they are protagonists, they tend to be Muggle Weight on the Super Weight scale. If they join a team, they are The Team Normal.

See also Weirdness Magnet, The Watson.note (Coincidentally, Martin Freeman has played both Arthur Dent and John Watson). Compare Did We Just Have Tea with Cthulhu?