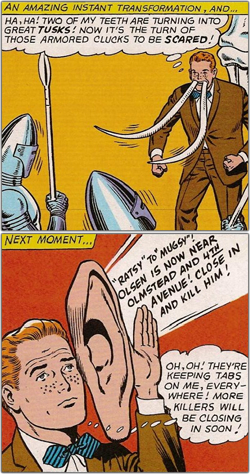 There are characters who gain New Powers as the Plot Demands, and then there are these. One minute, they gain cool fire powers, and the very next, they lose that ability and transform into a Green Lantern Expy, or some weird and wacky powers that they may or may not want or need.

A Sister Trope to Unfazed Everyman. Where an Unfazed Everyman is a normal person surrounded by weirdness, but who stays normal nonetheless, someone who is Superpower Silly Putty is one who is transformed by the weirdness. Numerous times. He never keeps the powers, however; he always manages to lose them just as he is getting used to them. Don't expect him to know exactly how to use them during the duration.

Pretty much a Dead Horse Trope by now, it was used quite frequently in the Silver Age.

A subtrope of Superpowers For A Day.

Not to be confused with Plastic Man, a literal Silly Putty superhero.