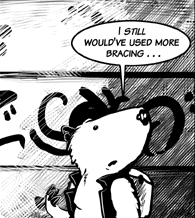 Wombats really love their bracing.
Shadowchild: Should we go help?
Digger: Go help who? How do we even know what side we're on? And if this is some kind of raid, I'm pretty sure both sides are going to be stabbing first and asking questions later. If at all.
Advertisement:

is a black-and-white webcomic by Ursula Vernon. It starts off with a disoriented wombat named Digger-of-Unnecessarily-Convoluted-Tunnels getting lost far from home, and her attempts to get back. Along the way she encounters hyena people, dead gods, the shadow of a dead bird, a talking statue of Ganesh, and some crazy veiled monks. She reacts to all of it with unshakeable Wombattish practicality, a bone-dry wit, and occasional resort to outright sarcasm. She also knows a heckuva lot about digging and architecture.

After having been hosted on a subscription site for most of its existence, it is now completely free to read. So go read it. Preferably from the beginning.

(NOTE: As of 2017 a handful of pages may not display properly, but can be viewed complete on the Wayback Machine.) A full backup can also be found here

Started in March, 2003. Ended on March 17th, 2011, to the tears of many; though the ending was written just as it had originally been planned, it left enough open questions that some felt it was abrupt. Digger won the Hugo Award for Best Graphic Story in 2012 and the Mythopoeic Award for Adult Literature in 2013.

was held for it, with the aim of collecting all six volumes into one omnibus. It has the dubious claim to fame of being the only such Kickstarter, ever, to offer foam pickaxes and pear sculptures as add-ons. Another Kickstarter

was held for a 10th anniversary collection from Underthing Press, a publishing imprint founded by Patrick Rothfuss with the goal