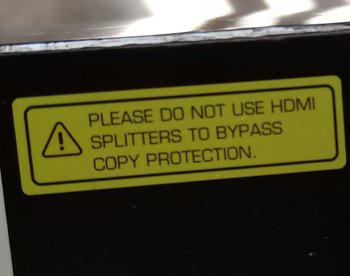 And please don't obtain said splitters from your local electronics store.
"Alright, listen closely. I'd like to help you [hands his client a notepad and pen], but I can't. I'd like to tell you to take a copy of your policy to Norma Wilcox on — [taps notepad urgently] Norma Wilcox, W-I-L-C-O-X — on the 3rd floor, but I can't. I also do not advise you to fill out and file a WS-2475 form with our legal department on the 2nd floor. I would not expect someone to get back to you quickly to resolve the matter. I'd like to help. But there's nothing I can do."
— Bob Parr, The Incredibles
Advertisement:

I'd like to explain that this is when Bob wants to say something, but for whatever reason can't, because I'm not supposed to. If I did, I'd say that maybe he'd risk his job if he spoke up, or maybe he just doesn't want to look crazy or malicious, or something like that. And I certainly can't tell you that Bob gets around this by mentioning it but pretending he isn't, as in, "Well I could tell you that the shutoff switch to the Doomsday Device is down the hall, first right, second left, behind the water cooler, but I won't do that because I'd lose my job." I'd like to explain that, in other words, he Could Say It But... he won't, except he just did...but I can't.

Sometimes used as an insult, especially in politics. For example, "I refuse to stoop to the level of calling my opponent a corrupt, greedy slimeball."

Truth in Television. The technical term is "paralipsis" or "praeteritio", depending on the nature of the information you're definitely not giving.

See also Suspiciously Specific Denial or I'll Never Tell You What I'm Telling You!, for those bits when this is not intentional. Also related to I'll Pretend I Didn't Hear That and Stepping Out for a Quick Cup of Coffee. Do not confuse with I Would Say If I Could Say. May result from the asker using Politeness Judo.

I wish I was able to let you know the following examples...

Bob Parr (Mr Incredible) uses this tactic to try and help a client.

Bob Parr (Mr Incredible) uses this tactic to try and help a client.