Muggles Do It Better 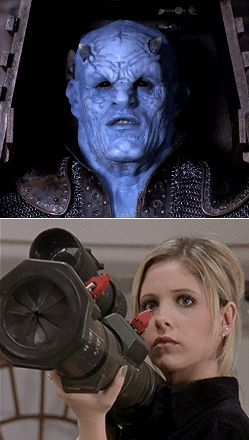 "No weapon forged can kill me."
"That was then. This is now."
"It doesn't matter how hard I try, or how much better the work is. It doesn't last the way it does when you do it."
— Wizened viewpoint on mortals, Changeling: The Lost
Advertisement:

In a Speculative Fiction setting, there are often a lot of people going on about how incredible and powerful the Phlebotinum is, which is why people who have it are the ones who move the plot rather than all the ordinary Muggles who need to be rescued.

Except, sometimes, the superhuman devices or abilities in the story aren't really all that earthshaking, at least not compared to the more mundane methods available. Sure, being able to create fire with your mind might be neat, but if it's not on a large enough scale, you might be better off with a handheld lighter. And a Trick Arrow that electrocutes people could be useful, but we do already have stun guns. And that guy saying he'll Take Over the World now that he's got skin as strong as steel? Yeah, apparently he's never heard of armor-piercing bullets. Of course, if they don't work, there's always the Nuclear Option.

Sometimes the usefulness of Muggle methods will be a big part of the story, like Van Helsing using modern scientific methods against vampires in Dracula. Other times supernatural abilities and Muggle abilities will be kept largely separate thanks to the Masquerade, but when they do intersect the superiority/equality of Muggle methods will be clear. And then there are some stories where it's clear the writers didn't really think about what ordinary people could contribute, but the fans certainly will.

There are two ways this trope can go if it isn't used correctly. In some cases, it applies if and only if the Muggles are Crazy-Prepared. A girl who freezes you at will may be able to kill regular soldiers easily, but if they have insulated suits specifically to fight her, well, then it becomes a teenage girl with a useless power vs. a squad of heavily-armed, trained soldiers. And one-sided fights aren't very entertaining. Usually. On the flip side, it can become unsatisfying fast if Fridge Logic sets in and critically-thinking viewers recognise that the only reason the Muggles win is because the supers are holding Idiot Balls, suffering from Misapplied Phlebotinum and using Hollywood Tactics rather than embracing the true potential available. For example, smart audiences may wonder why supers do not use guns when muggles do. Trying to get this trope to work well may involve a delicate balancing act. In fanworks it can result in something similar to Alternate History Wank in which the "wanked" party is the Muggles, and as such the term "Mugglewank" is sometimes used by detractors.

Related to, but distinct from, a Mundane Solution, which is where the Phlebotinum is given a specific weakness to some commonplace thing that it didn't necessarily have to have. See also Weaponized Weakness, when muggle methods are used to exploit an already dangerous Achilles' Heel or Weaksauce Weakness.

This trope is the main power and indeed the only hope of the Un-Sorcerer. Also a key characteristic of the Badass Normal, who utilize such methods in a way to keep up with (and sometimes defeat) the other superpowered beings of the universe. Can also lead to The Magic Versus Technology War, with the Tech Level being that of the present day.

Compare with Kinetic Weapons Are Just Better, which is when mundane weapons work better than fancy shiny phlebotinum-powered weapons, though not necessarily as sometimes the "mundane" weapons are pretty phlebotinum-loaded too. Compare Post-Modern Magik, which is when technology and magic intertwine. Also compare to Medieval Stasis, as this trope assumes the supernatural is locked in such while the muggles continue to advance. Contrast Guns Are Worthless, where those fancy muggle toys are, well, worthless in the face of a supernatural threat.

Unrelated to Tropers Do It Without Notability.