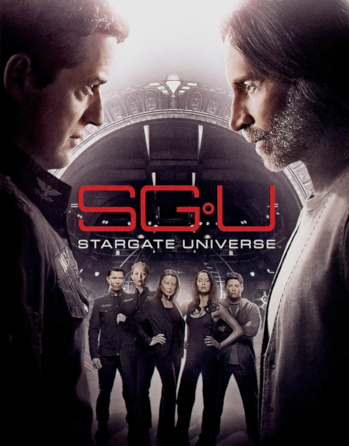 Where will Destiny take you?
Advertisement:

The third installment of the Stargate franchise that began in 2009 and ended in 2011.

A team of soldiers and scientists on an off-world base have finally cracked the secrets surrounding the unused ninth chevron of the Stargates (seven chevrons are used for regular trips, eight are used to travel between galaxies). With it, they are able to connect a wormhole to an Ancient ship called the Destiny. This comes at a very bad time as remnants of Stargate SG-1 villains attack the outpost. In a desperation maneuver they travel to Destiny without a proper recon of the area and about 80 people are stuck on a very old ship that is falling apart.

Because the mission was not planned, many of the main characters are not the typical specialist team that has been in the previous shows of Stargate SG-1 and Stargate Atlantis. Besides a handful of leaders, the rest are either young and inexperienced, or untrained civilian scientists, all of whom are caught up in a situation far outside what they expected.

SGU had a couple of fairly big name actors (Robert Carlyle, known for his role in the film Trainspotting, and Ming-Na Wen, a Chinese-born actress with numerous cinematic credits, who was probably best known for her role as Dr. Chen in the medical drama ER and would go on to play Melinda May in Agents of S.H.I.E.L.D., and as the voice of Mulan).

The show was canceled midway through its second season. The cast and crew only learned of the cancellation via Twitter. In June 2017, the series got a continuation in the form of a comic book series from American Mythology Productions, picking up immediately after Season 2.

This shows uses the following tropes: