Franchise / Planet of the Apes 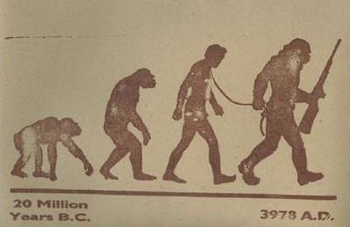 "Beware the beast Man, for he is the Devil's pawn. Alone among God's primates, he kills for sport, or lust, or greed. Yea, he will murder his brother to possess his brother's land. Let him not breed in great numbers, for he will make a desert of his home and yours. Shun him; drive him back into his jungle lair. For he is the harbinger of death."
Advertisement:

A media franchise based on the 1963 novel La Planète des singes (Planet of the Apes) by French author Pierre Boulle, that has generated nine movies with three separate continuities, a live-action series, an animated series and canon novels.

The franchise, as an allegory of human evolution and hubris, centers on a role-reversal premise where humanity's fall leads the great apes to evolve into a dominant, thriving, highly-intelligent civilization, while humans are now the caged animals.

Primary inspiration for the roleplaying game Terra Primate, by the makers of All Flesh Must Be Eaten.

open/close all folders
Franchise in General
Comics
There have been multiple comics series set on the Planet of the Apes.

Marvel ComicsMalibu PublishingMalibu Publishing, by way of a division called Adventure Comics, produced multiple Apes comics set after the time of Caesar.Adventure also reprinted Marvel's adaptations of the first three films as well as a four-issue mini-series featuring installments from Marvel's Terror on the Planet of the Apes saga.Dark Horse ComicsMr. ComicsBoom! StudiosThe largest continuing publisher of "Apes" comics remains Boom! Studios, which has published multiple serials set in both the original continuity and the 2011 reboot continuity.
Tabletop Games
Novels
All the films have received novelizations, minus the original 1968 film and Rise of the Planet of the Apes. Both TV series have been novelized in part as well, with four novels ("Man The Fugitive", "Escape To Tomorrow", "Journey Into Terror" and "Lord Of The Apes") adapting eight episodes of the original TV series and three more ("Escape From Terror Lagoon", "Man, The Hunted Animal" and "Visions From Nowhere") adapting nine episodes of Return to the Planet of the Apes. The original film series' four novelizations, the seven TV novelizations and the 2001 film's novelization were re-issued in a series of four omnibus editions in 2017 and 2018.

The 2001 film has four original tie-in novels: The Fall, Colony, Force, and Resistance. There were more planned, but they were canceled due to poor sales.

Conspiracy of the Planet of the Apes is the first in a planned series of six novels by Andrew E. C. Gaska, intended to add to the canon of the original movie series and fill in some gaps. The second novel, Death of the Planet of the Apes, was scheduled for release in 2013, but had been pushed back (seemingly indefinitely)), eventually getting a release date of November 2018. Conspiracy centers on Landon and his ordeal while Taylor is with Zira and Cornelius in the first film. It also tells the story of Dr. Milo, and his endeavour to study and repair the damaged spacecraft.

Planet of the Apes: Tales from the Forbidden Zone is a collection of short stories taking place in the continuity of the original films, released in 2017.

Planet of the Apes: Caesar's Story is a 2018 novel where the character Maurice retells the events of Rise/Dawn/War and the events in-between.

"I can't help thinking that somewhere in the universe there has to be something better than man. Has to be."

Alternative Title(s): Planet Of The Apes