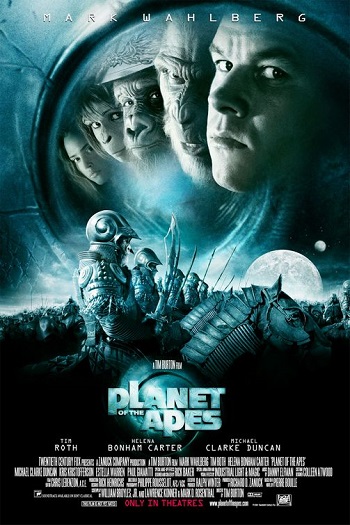 "Take your stinking hands off me, you damn dirty human!"
— Attar
Advertisement:

Tim Burton's 2001 remake of the Planet of the Apes franchise.

An astronaut, Leo (Mark Wahlberg), works in a space station where genetically enhanced apes have been trained to pilot space pods, to search and study a strange electromagnetic storm phenomenon. When it's found a chimpanzee flies into it and after his signal's cut, Leo chases it in another pod against orders, to save the chimp. The storm makes him travel in time, after which he crashes on the planet below, encounters some humans and is captured by highly evolved apes. He is enslaved with the rest of the humans. He is tortured by the apes until one (Helena Bonham Carter) takes pity on him and helps the humans escape. He goes to the apes' Forbidden Zone Calima to discover the crashed space station, which apparently has been there for thousands of years.

There, the hero plays a recording made by the ship crew, which tells they decided to go after Leo, crashed, and the apes rebelled and killed most of them. An army of apes attacks and the astronaut responds by hitting them with the fuel from the station's tanks. When the ape army recovers, a large battle occurs until the original chimp returns in its space pod. It remembers Leo and shows affection towards him; the apes revere it as a God, thus they stop fighting and treat the humans fairly. Having achieved peace and become a hero, the astronaut decides to return home through the same electric spacestorm. He goes back to Earth... and discovers the civilization he used to know is now inhabited by talking apes.

This movie contains example of: