Film / Battle for the Planet of the Apes 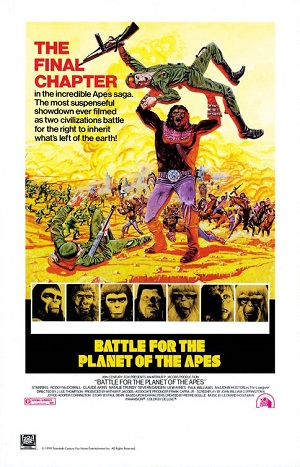 This sequel follows the ape leader Caesar (Roddy McDowall) 12 years after a global nuclear war has destroyed civilization. Living with his mate Lisa and their son Cornelius, Caesar creates a new society while trying to cultivate peace between the apes and remaining humans. Caesar is opposed by gorilla Aldo (Claude Akins), who wants to imprison the humans that freely roam Ape City while doing menial labor. To make matters worse, a tribute of human atomic bomb mutations are out to make life miserable for the peaceful ape tribe. The story is told primarily in flashback with the opening and closing taking place in the year 2670.