Film / Beneath the Planet of the Apes 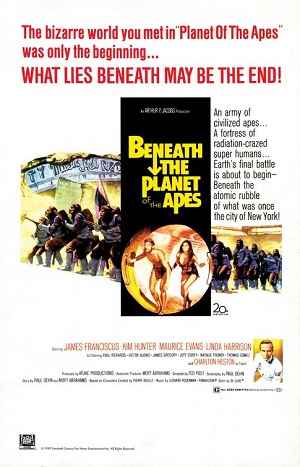 A fellow astronaut, Major Brent, is sent to find Taylor and rescue him... and also crashes on the Planet of the Apes. He first finds Taylor's girl Nova. After they discover a former New York City subway station in a cave, he realizes where-as well as when-he is. The station leads to an Underground Lair inhabited by mutant humans with psychic powers, who have already imprisoned Taylor, and cultivate a "Divine Bomb". When the apes decide to invade the Forbidden Zone and then find the mutants' lair... well, the trope examples below show it's catastrophic.

The sequel to this movie, Escape from the Planet of the Apes, was released in 1971.