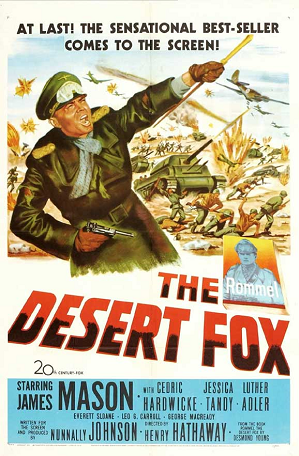 The Desert Fox is a 1951 Film of the Book (The Desert Fox) directed by Henry Hathaway and starring James Mason as Field Marshal Erwin Rommel. These codified the 'Rommel myth' of the late German officer as an 'honourable martial genius' in the Anglosphere.

The film shows the downfall of his career between fall 1942 and October 1944, from the Second Battle of El Alamein to his involvement in the July 20 Plot, resulting in his suicide. Typically for an English-language film released just six years after World War II, the film is incredibly sympathetic to Rommel and other German officers, portraying them all as non-Nazi or even anti-Nazi professionals who are only serving the Nazis because they love and want to defend their country from Communism. The truth was a lot more complex than this.

Has a pseudo-sequel or companion film in The Desert Rats, in which Rommel (Mason again) is a lot less sympathetic.