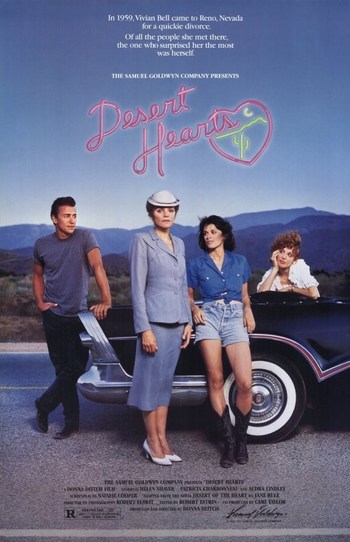 A 1985 romantic drama film directed by Donna Deitch, loosely based on Jane Rule's autobiographical 1964 novel Desert of the Heart.

In 1959, Vivian Bell (Helen Shaver), a repressed, middle-aged English professor from New York City, comes to Reno, Nevada for a quickie divorce. She stays at a local ranch, where she meets Cay Rivvers (Patricia Charbonneau), a free-spirited young casino employee-cum-sculptress who is openly lesbian. Cay soon confesses that she's falling in love with Vivian, who's shocked — especially as she gradually admits to herself that the feeling is mutual...

Desert Hearts is regarded as a classic of queer cinema. It's one of the first films to portray a lesbian relationship positively, and its more-or-less Happy Ending pointedly contrasts with earlier movies about lesbians (and gay men, for that matter) in which one of the gay characters either dies or becomes heterosexual. Not surprisingly, it has a strong LGBT Fanbase.

Compare with Carol, another lesbian romance adapted from a novel and set in the 1950s.