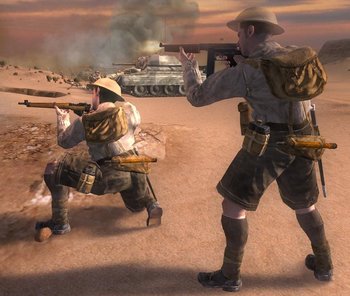 The Desert is everyone's enemy.
"Our supremacy on Caladan depended on sea and air power. Here, we must develop something I choose to call desert power."
— Duke Leto Atreides, Dune
Advertisement:

So you have a Thirsty Desert. That in and of itself is already an inconvenience for anyone going through it, but for any soldiers trekking through one in the middle of a war, they now have an additional threat, in this case an enemy force that they must fight. But that isn't the end of their problems. Any warring faction now has to deal with shortages of water and fuel supply, two things that, when crossing through the desert, are a matter of life and death. On a positive note is that there are no civilians for miles on end, and that tanks are now given a free rein to advance straight through wherever they please. When there are civilians, expect a Hidden Elf Village near an oasis, or as later works depict, in major cities surrounded by desert.

Desert Warfare is Exactly What It Says on the Tin, a trope that involves fighting that takes place in a desert. In contrast to Jungle Warfare and Urban Warfare, where fighting takes place mostly in close-quarters, Desert Warfare is a new story altogether. In this kind of scenario, expect elite soldiers trained in fighting in the desert performing long range patrols, usually on specialized vehicles, but also on foot on certain occasions. These same soldiers also have to deal with constant supply issues in the absence of Easy Logistics, namely with ammunition, fuel, and most importantly, water. As mentioned above, tanks are now able to move freely and advance quickly, and this can usually end up with a massive tank battle taking place. Because of this, defending forces will usually set up Anti-Armor defenses such as anti-tank artillery or land mines, usually concealed with camouflage netting. In ancient settings, or settings that don't involve tanks, cavalry charges, usually on horse or camel, but occasionally on chariot, are also common.

Compare and contrast with the aforementioned Urban Warfare, Jungle Warfare, and Winter Warfare, where fighting takes place in cities, lush tropical rainforests and jungles, and in the snow, respectively. Interestingly, a lot of recent examples of Desert Warfare also overlap with the first one, especially if the work is set during The War on Terror.