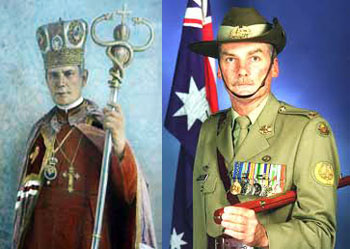 A Staff of Authority, also known as a staff of office, is a staff or rod which symbolizes an official's position, a social rank or a degree of social prestige. Staffs, scepters, batons, swagger sticks, pace sticks, riding crops (when used like a swagger stick instead of for riding), ceremonial maces, and crosiers are but a few examples. Canes can qualify if they are used to indicate a specific office or profession.

Long staffs are often associated with old age, because of their original use as walking stick. Such staffs are frequently found in hands of those whose office is associated with intelligence, maturity, wisdom, experience, and careful consideration.

Alternatively, certain types of staffs, such as swagger sticks, regimental sticks, and pace sticks, are associated with military authority, physical strength, and aggressive leadership, in large part because such sticks were once used (and in some armies still are) to inflict corporal punishment on subordinates. A swagger stick might be part of making a character look like a Four-Star Badass, Colonel Badass, or Drill Sergeant Nasty.

If the trope is being subverted, a rod or swagger stick might be placed in the hands of a Miles Gloriosus or The Neidermeyer.

This trope is Truth in Television and Older Than Dirt. See also The Other Wiki for more information on Real Life staffs of office

A Magic Staff sometimes doubles as a Staff of Authority. Staffs used mainly for combat purposes that are not intended as a mark of authority would be a Simple Staff. Maces designed for fighting rather than display could fall under Carry a Big Stick. However, there can be overlap in these tropes. A staff, rod, or mace can have magical or fighting uses and still be a Staff of Authority, but only if it is also a symbol of authority, rank, or position. A Staff of Authority in the hands of royalty would also be a part of Requisite Royal Regalia.

Compare Lawman Baton, another stick that expresses authority (in this case, the law).