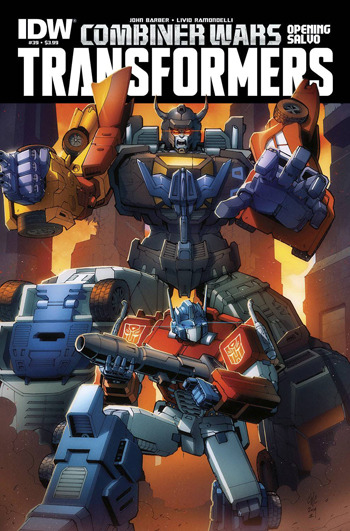 Starscream remains in power back on Cybertron and he's turned his sights to the stars. He seeks to reunite the wayward Cybertronian Colonies, starting with Caminus, all under his total rule. However, with the ever present threat to his leadership, Starscream turns to the age old Transformers super weapon: combiners. Now it's up to Optimus, Windblade and the rest to find some way to stop these titanic monsters from tearing the peace down and cementing Starscream's mad power grab.

This 6 issue event is written by John Barber of Robots in Disguise and Mairghread Scott of Windblade with art by Livio Ramondelli and Sarah "Fayren" Stone. It is followed by a one shot called Combiner Hunters written by Scott and drawn by Sara Pitre-Durocher which functions as something of a bonus 7th issue debuting the fan voted combiner, Victorion.

Combiner Wars is the first in a Trilogy of "Events" to tie into Toylines. In 2016, Hasbro teamed up with Machinima to produce an animated miniseries based on the same toyline as the comic, The Transformers: Combiner Wars.