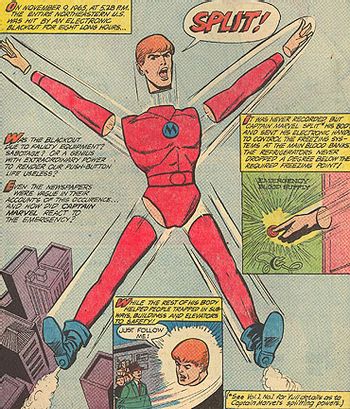 Aren't you glad we don't have characters this silly any more? Oh, wait...
"Rocket from their sockets!"
— Visual Eye, firing his eyes out of his head, The Tick
Advertisement:

You're surrounded by bad guys, outnumbered many to one. What do you do? Call for back up? No, it's time to split up!

Detachment combat happens when a character, robot, monster, or spaceship has the ability to break into sections, with each piece capable of fighting separately. May be justified with Easily Detachable Robot Parts.

For flesh beings who do this, the fact that the limbs can work despite being, you know, detached is either not addressed or made into Required Secondary Powers; another secondary power is to levitate all those limbs, and superhuman coordination or Organ Autonomy (for robot characters/mechas, the technology used in building them likely justifies all of the issues above). Don't expect to see exposed organs or blood gushing out of the detached parts; they're either neatly covered or Made of Bologna.

A Rocket Punch is a form of this. Helping Hands is also a form of this if it's voluntary. Characters with Floating Limbs have justification for this, although they may not always be able to perform this.

Distinct from Pulling Themselves Together in that detaching is a feature and an attack, not the result of damage.

Contrast with Combining Mecha and the horrific mutilation tropes: An Arm and a Leg, Off with His Head! and Half the Man He Used to Be. User of this trope may fool their enemy into thinking that the three aforementioned tropes happen, only to surprise them by making the detached body parts move.

See also Disposable Vehicle Section, Losing Your Head and Drone Deployer. For different kind of detaching, compare One to Million to One; Blob Monster and Elemental Shapeshifter may be able to do something similar. Does not mean that the combatant appears not to care about the fight — that's Cavalier Competitor.

Alternative Title(s): Battle Group Of One, Swarm Of One