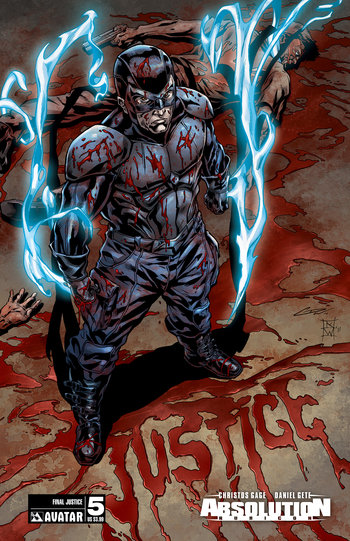 Yup. That about sums this one up.
Advertisement:

Absolution is a superhero comic book for mature audiences by Christos Gage (Avengers Academy) and Roberto Viacava, and published by Avatar Press. The first six-issue volume was launched in the summer of 2009, with a follow-up five-issue series, Rubicon, that began in 2013. Gage has written that the book is a superheroic take on anecdotes he's heard from friends who are or were police officers. (Specifically, the idea came from the fact that there are still parts of the United States where someone who's accused of murder may be able to claim his victim "needed killin'" as a legally viable defense.)

John Dusk is one of several superhuman "enhanciles" who work for the police department as a sort of high-end SWAT team. Unlike his co-workers, however, John has no outlet away from the job and he begins to suffer from PTSD and insomnia. Soon he begins using his powers to commit nearly untraceable murders, targeting criminals who he knows he could never legally catch, or who will evade prosecution. This forces him to lie both to his superiors on the police force and to his girlfriend, Karen, a homicide detective who's trying to solve the murders he's committing.

Absolution: Rubicon, set shortly after Dusk's dismissal from the force, follows the fallout from his campaign and Dusk's descent into the life of a vigilante.

This was followed by Absolution: Happy Kitty featuring the origin of sociopathic killer Happy Kitty.