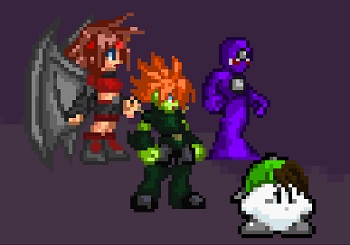 The original series
"Sometimes I wonder, if there is more to this game than everybody thinks there is. Like there is something bigger in all of us, just hiding out, watching us. Wouldn't you like to know?"
—Alpha's trailer of the remake.
Advertisement:

Describeth TOME here? But of course! For I, NYLOCKE, DRAGON OF CAUTIONARY PAGE EDITION, will gladly oblige thee!

The plot centers around a group of players of an MMORPG titled TOMEnote no, not that TOME and their fight against the D-Bug organisation, a group of hackers seeking a mysterious "Forbidden Power", sometime in the not-too-distant future.

TTA started as a humble amateur sprite-animation series, which gradually improved during its long run. The series is notable for its great length (a total of 73 episodes over 3 seasons and a four-part movie), especially for its medium.

During its somewhat sloppy early stages, the series used a unique combination of sprites and hand-drawn graphics, while the voice acting was mostly done by the writers of the original RP, each one voicing his or her own character.

The author has openly admitted he's had some heavy influence from .hack, Mega Man Battle Network, and ReBoot. References to Anime are also frequent, Dragon Ball Z being the most common—for example, the character of Zetto, fact which is frequently lampshaded by other characters.

After Niosi entered college, he had less time for the series (at first, the fourth 27-episode season was shortened to a handful of OVAs, then scrapped altogether). He continued it with smaller projects, such as the three-part Super Freakin' Parody Rangers, which features Expys of the characters Zetto and Ruri. 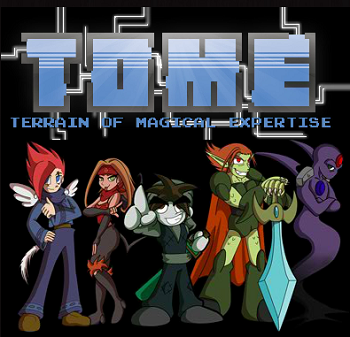 On 11/11/11, a Continuity Reboot of TTA known as TOME: Terrain of Magical Expertise was released, this time with the internet equivalent of an All-Star Cast (including LittleKuriboh, ShadyVox, D-Mac Double, and Jon St. John, among others), an original soundtrack composed by Kajmaster Kajet (best known as the creator of the OVER 9000! meme) and The Living Tombstone, and completely original animation mostly done by Chris Niosi himself.

The remake features a unique style of animation reminiscent of video games such as Mega Man Battle Network and The World Ends with You, and it looks just that cool. The series spans Fifteen episodes (plus the special prequel episode "/File:Zero"), seven shorts, and an April Fool's Special, the first ten of which are considered to be the show's first season (along with the shorts, which are actually notably important to the plot). The latter five episodes (and the prequel episode) are considered to be its second season (due to the fact that they were funded separately via a successful campaign on GoFundMe), with Episode 15 being considered the show's Grand Finale.

For most of its lifespan, TOME had an somewhat interesting upload cycle, due to the fact that it continued for over three years uninterruped (resulting in an even longer run than its predecessor, which only lasted about two and a half years before its cancellation). Although the remake's first four episodes were funded by Newgrounds (and were at first exclusive to it), the series stopped posting new episodes to Newgrounds after Episode Nine and eventually expanded onto YouTube (although the YouTube uploads were taken down for a time before being re-uploaded in two parts via Channel Frederator). The series eventually received its own website (which used embeds of versions of the episodes uploaded to Blip) before finally finding a permanent home on YouTube, where Chris Niosi uploaded complete versions of all sixteen episodes, seven shorts, and the April Fool's Special to his channel (along with special commentary videos previously only available on Soundcloud, blooper reels, and interesting Fact Bubble Specials inspired by Avatar: The Last Airbender with trivia about the show found nowhere else), which replaced the old Blip uploads on the official website.

for a Video Game adaptation (a game about a game!), set in its own universe, has begun, featuring new versions of the characters and a "White-Hat Hacker" Player Character, a Canon Foreigner to the previous two web series. The project was funded 48 hours after the campaign's launch. Tropes about said game can be found under the Video Game tab.

On November 11, 2017, in honor of the 6-year anniversary of the TOME series, the YouTube channel SiIvaGunner uploaded mashups featuring the soundtrack of the web series and upcoming game.

On December 14, 2019, due to the Adobe Flash shutdown at the end of 2020, Niosi uploaded remastered versions of every Tv Tome Adventures episode

to a Google Drive, posting a video with a link to said google drive to YouTube. Despite his personal ire for the series, Niosi said that he would rather have every Tv Tome Adventures episode available for future fans rather than allow it to die completely, and could not upload the episodes themselves to YouTube due to the interactive element involved with each .swf file.

Upon the announcement of the RPG adaptation, Niosi confirmed that the webseries would not see any more episodes, and that Season 2 would be the final season. This means that any entries referring to the Grand Finale or to the Season 2 finale are referring to the same thing, and that Episode 15 is not a Series Fauxnale, but the real deal.

The series now has a tool for voting favorite episodes, which can be found here.

open/close all folders
TTA (the original series)
TOME (The Remake)