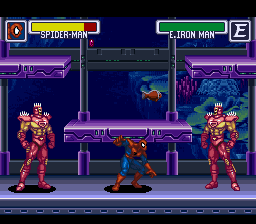 Whenever a video game has a boss fight against multiple characters, the game can either have each boss with their own life meter, or it can have all the characters sharing a single life meter, with every enemy, regardless of how much they've been personally damaged, inexplicably keeling over once it's been emptied. In some games, the game will balance out the fact that the player can control more than one character by having them share a life bar.

An alternative to this is when multiple enemies technically have their own life meter, but for the sake of avoiding Multiple Life Bars they've all been combined into one giant life meter, and emptying it involves defeating any individual enemy (or it might involve one giant enemy with multiple destructible parts that have to be taken out.)

Examples of characters all getting their health from the same life bar:

Examples of this trope being used as an alternative to Multiple Life Bars.

Examples of both types at once: