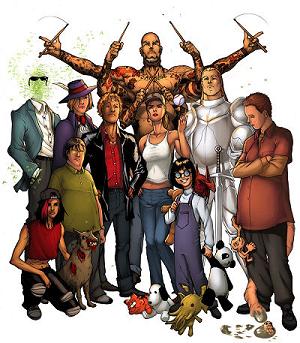 Wild Cards is a "shared universe" Superhero book series, originally conceived by George R. R. Martin (A Song of Ice and Fire) as a spin-off from an RPG organized by several Albuquerque-area authors. The world of Wild Cards is pretty much like ours, until 1946. That year, the ruling elite of a world of aliens physically quite similar to humans decides to use Earth as the testing ground for a bioweapon in the form of a virus, later called Xenovirus Takis-A, or the "Wild Card" virus. The test sample is stolen by a pulp-style Nazi-sympathizer villain calling himself "Dr. Tod"note German for "Dr. Death", who releases the virus over New York City.
Advertisement:

Ninety percent of those infected with the virus die horribly as their own DNA turns against them. Nine percent are mutated, gaining extra eyes, pincers for hands, or skin that bruises at the slightest touch. The lucky one percent not only remain physically unchanged, but they gain superpowers. And a negligible percentage of the one percent end up physically unchanged, but gain a superpower that isn't really super, such as the ability to change the color of the wallpaper around them. It is later determined that these numbers are actually wrong, and the number of infected was much higher than previously realized: many if not most of those infected were, in fact, apparently unaffected, but carried the infection latently, and could pass it on to the descendants as a recessive trait.

Wild Cards examines, somewhat realistically, the effects of a world where a small portion of the citizens have suddenly gained superpowers. But because the series is in part an Homage to the superhero genre, there are some tropes involved that one does not normally find co-existing in the same story. There aren't many masked vigilantes, as they eventually end up revealing their secret identities or have them discovered. The mutated victims, the "Jokers", are regularly treated like scum, strung along by the government, and end up developing their own subculture. The superpowered "Aces" don't always go into crimefighting or villainy, either; some of them parlay their talents into fame or private industry.

Twenty-three volumes and counting, the series has had a somewhat rocky publication history. After publishing twelve volumes with Bantam, the series switched first to Baen and then to iBooks, before getting picked up again by Tor after a hiatus of seven years. Tor is also reprinting the older books in the series. The series has also been adapted for RPGs (GURPS first, Mutants & Masterminds much later) as well as several series of comics, including:

Books in the series
Advertisement:
Contributors to the series