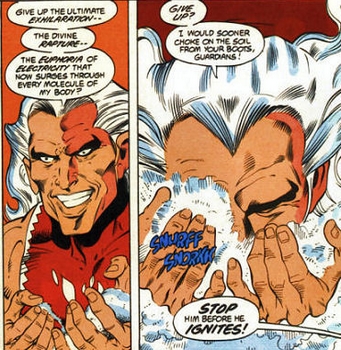 A character is addicted to a substance: drugs, alcohol, caffeine... For most people, it would only cause lots of trouble. Not for this guy. He earns superpowers from an over-consumption, and/or each time he consumes the substance.

Usually, nobody else will get this kind of powers from this substance. Not some kind of Super Serum or Psycho Serum, or anything similarly exotic. The drug was not designed to give them superpowers, it just inexplicably does.

A subtrope of Addictive Magic. Related to Drunken Master (when the character is indeed an alcoholic and much stronger after a drink), Booze-Based Buff and Must Have Caffeine. Compare Power High. See also Caffeine Bullet Time and Power-Up Food.

Not to be confused with Drunk on the Dark Side.