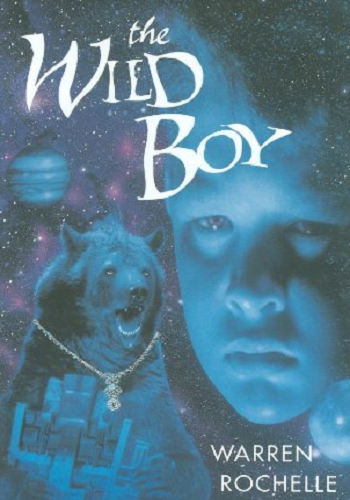 The Wild Boy is a science fiction novel written by Warren Rochelle in 2001. It's a futuristic post-Alien Invasion novel in which humans are kept and bred as pets by a race of bear-like aliens called the Lindauzi, who manipulated humanity by killing millions with a virus, then showing up seemingly by coincidence with a cure. Now, they breed humans, whom they call 'dogs', in a bid to save their race from regressing into wildness and re-create the bond they shared with the Iani, the race who originally raised them to sentience.
Advertisement:

The book shifts between two time frames, telling the stories of both a Lindauzi-bred 'dog' named Ilox and his Lindauzi owner/companion Phlarx, and Ilox's son, a wild human or 'wolf' named Caleb, who is captured and trained to be a performing animal. The two stories intersect for the book's climax. Intersparced with the main narratives are flashbacks to glimpses of the Lindauzi leaving home, the decay of humanity and the arrival of the Lindauzi.