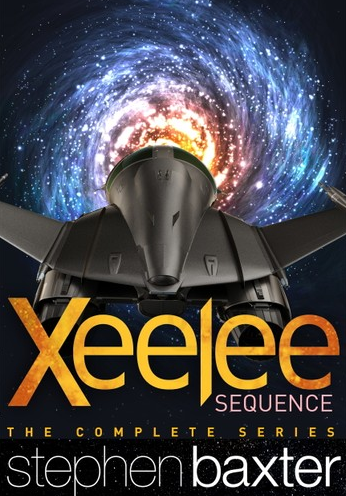 The Yin to Doctor Who's Yang.
"Do not remember heroes. Do not speak their names."
"Remember my words, but do not speak my name."
"I have a vision of a Galaxy overrun by mankind from Core to Rim. Of four hundred billion stars each enslaved to the rhythms of Earth’s day, Earth’s year. I have a vision of a trillion planets pulsing to the beat of a human heart."
"And I have a vision of a child. Who will grow up knowing neither family nor comfort. Who will not be distracted by the illusion of a long life. Who will know nothing but honor and duty. Who will die joyously for the sake of mankind."
Advertisement:
"That is a hero. And I will never know her name."
"Always remember: a brief life burns brightly."
— Hama Druz, The Founder of the Interim Coalition of Governance
"Most relevant to /tg/'s interests, though, is that Xeelee is unbelievably grimdark. Like, holy shitballs, final word on the matter, makes 40k look like Sesame Street with butterflies and rainbows in comparison, grimdark."
— 1d4Chan's description

The Xeelee Sequence, by Stephen Baxter, is a sprawling series of novels and short stories all set within the same universe.

In the far future, mankind expands out into a hostile universe, filled with intelligent species as weirdly varied as they are ruthless. Above them all, however, are the top dogs of the universe: the Xeelee, the god-like de-facto rulers of the universe. The novels of the "sequence" follow various threads, such as Earth being invaded and occupied by bizarre aliens, or a hopeless war between mankind and the Xeelee, along with various other stories concerning humanity's place in a relatively bleak universe.

Overall, the Sequence is a loosely connected series, covering literally billions of years of history, with later stories expanding the scope to include literally the entire history of the universe, from beginning to end. The main connecting thread throughout all the novels are the Xeelee's enduring presence and influence on the history of the universe and mankind. The series has a definite chronology, but the novels and short stories were published in Anachronic Order. However, all of them can be read as individual stand-alone stories.

Novels in the Xeelee Sequence:

And then— There was a box, drifting in space, tetrahedral, clear-walled. From around an impossible corner a human walked into the box. A rope woven of bark trailed behind him, out of sight. The human was dressed in treated animal skins. He was gaunt, encrusted in filth, his skin ravaged by frost. He stared out at the stars, astonished. Michael's extended awareness stirred. Something had changed... History resumed.