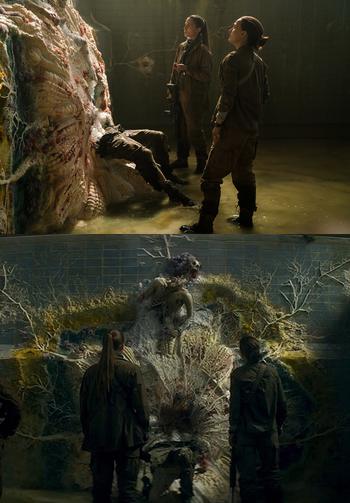 All in all, you're just another brick in the wall...
Advertisement:

A subtrope of Body Horror where recognizably human/humanoid bodies have become attached to a wall or other solid structure... permanently. Commonly involves extremities and even the torso of the body dissolving, disintegrating, or disappearing into the surroundings while the head or face remains visible. They're not just stuck to a wall with glue: victims of this trope have merged with an underlying structure in a manner that would make it impossible (or at least very, very painful) to remove them in one piece.

Extra horror points if the body is still alive when the process starts, extra-extra points if the victim maintains consciousness for any duration of the process. If they remain alive and conscious of their predicament for an extended length of time, this can lead to some serious And I Must Scream as the victim remains trapped and nigh helpless awaiting either death or rescue.

While there are a number of forces that can engender this sort of mutilation of the human form, Festering Fungus and Tele-Frag are common causes. If left unchecked, an initial instance of this can evolve into a bad case of Meat Moss. Bodies that have been anchored to out-of-the-way locations tend to serve the purpose of a Ceiling Corpse if they aren't spotted immediately.

If there's a villain who is purposefully doing this (either to corpses or still-living people), it's to show that Evil Is Visceral. Obviously, in such instances it also overlaps with Human Resources.

Compare to Buried Alive or Sand Necktie, where the victim is trapped in a confined space with the intention that their entrapment eventually kills them. Contrast with Genius Loci, where a location develops/ maintains cognizance (or a character fuses with a location or structure and considers it to be an extension of their body). Contrast with Flesh Golem, where human bodies are fused to other human bodies (and tend to maintain some degree of mobility).

Peach has been folded by Olly to make up part of a wall of his Origami Castle.

Peach has been folded by Olly to make up part of a wall of his Origami Castle.