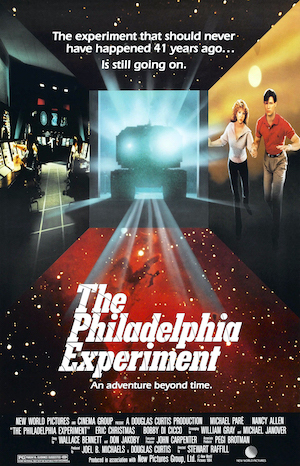 The Philadelphia Experiment is a Science Fiction film released in 1984 about Time Travel.

Two sailors from 1943, David Herdeg (Michael Pare) and Jim Parker (Bobby Di Cicco), become Fish out of Temporal Water when the US Navy destroyer they are stationed on vanishes as an unforeseen side-effect of an experiment in creating an electromagnetic Invisibility Cloak, and they find themselves in 1984. While they deal with the culture shock, Parker is overcome by the out-of-control side effects and disappears. Herdeg, searching for an explanation for what happened to him, winds up at a military installation where it is revealed that a second cloaking experiment is underway, this time involving an entire city. It, too, vanished, and now there's a huge vortex in the sky that is sucking everything into it and growing larger.

It turns out that the interaction of the two experiments, one in 1943, the other in 1984, has created a time warp that captured both the destroyer and the city and threatens The End of the World as We Know It. Herdeg is given an experimental suit to protect himself from the effects of the vortex, and allows himself to be sucked back in in an attempt to shut down the destroyer's cloaking field.

The movie is Inspired by…, and takes its name from, a Conspiracy Theory which itself revolves around a supposed invisibility experiment conducted during WWII

, which is said to have resulted in the same side effects as depicted in the movie. The story's most probable origin lies in WWII experiments with whole-ship degaussing as a countermeasure against magnetically triggered sea mines, likely conflated with contemporary generator experiments aboard a destroyer which produced visually impressive, yet almost entirely harmless, corona discharges.

It was followed by an In Name Only sequel in 1993: The Philadelphia Experiment II.

The Philadelphia Experiment provides examples of: