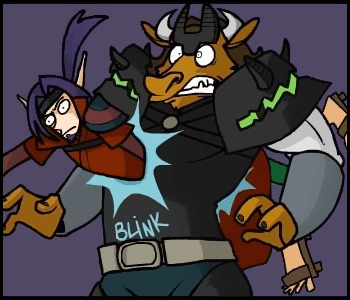 Blink and you're dead.
Rory: Where's Nephew?
Amy: He was standing right where you materialized.
The Doctor: Ah. Well... He must have been redistributed.
Rory: Meaning what?
The Doctor: You're breathing him.
— Doctor Who, "The Doctor's Wife"
Advertisement:

Powers like teleportation can be very dangerous if you don't look where you're going. If you teleport into someone else, or someone else teleports into you... splat.

The term comes from early First-Person Shooter Video Games, where it is possible to teleport or respawn in the same space as another player. But the hitboxes lining up could cause a lot of trouble, so usually what happens is the person who was there first dies, and the person teleporting in is perfectly fine. It's called the "last one standing" rule. Whoever is the last one to arrive, survives.

This is also known as interpenetration, especially when there is no exploding involved.

In the cases where this is harmful to the teleporter, the dangers of teleporting into a space currently occupied by air and dust are usually ignored. This can be handwaved by stating that the teleporter is capable of displacing gases, liquids, and minuscule solids therein, or by the fact that compared to about every other substance humans normally deal with, air is very thin stuff.

The usual aversion is Swap Teleportation. Then, if you appear inside a mountain, a statue appears at the starting position, but you're still Buried Alive unless you can teleport again immediately (bearing in mind that being entombed this way tends to impair one's ability to speak, move, or indeed think clearly.) In this case, any living being who is teleported into will be horribly eviscerated, while the one doing the teleporting may be merely psychologically traumatized.

The opposite of a Portal Cut (a perfect guillotine made by disconnection of the gate's surfaces while someone or something is passing through, or otherwise using partial teleportation to cut something apart). If the teleporter isn't fine tuned, expect a Teleporter Accident to result.

See also Portal Slam (when there's something in the way when you try to enter a teleportal). Can be used to defy Inertia Is a Cruel Mistress by destroying the offending obstacle, or as Weaponized Teleportation. The supertrope is teleporting things to anyplace that's inherently extremely dangerous even if it's not actually inside a solid object, such as into deep space, over lava, or 100 feet straight up. A No Flow Portal may be deliberately designed to have this sort of effect on the unwary.

Not to be confused with Telefang.

Clipping Through The Wall

Dr. Lancaster's speech degenerates into incoherent stuttering as he attempts to explain the plight of an employee who Tele-Fragged into a wall.

Example of:
Deteriorates Into Gibberish

Clipping Through The Wall

Dr. Lancaster's speech degenerates into incoherent stuttering as he attempts to explain the plight of an employee who Tele-Fragged into a wall.