Recap / Star Trek: The Next Generation S2E6 "The Schizoid Man" 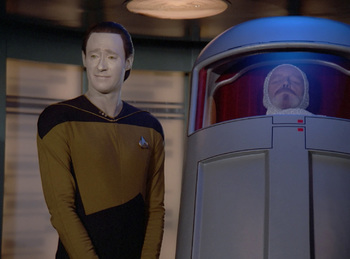 "Just look at that face. The face of a thinker. A warrior. A man for all seasons."
Advertisement:

The Enterprise receives a distress call from the assistant of brilliant cyberneticist Dr. Ira Graves, asking for a doctor. While en route, another distress call comes in from the USS Constantinople. The Picard decides to transport a small away team to Graves' residence to care for the man while the ship flies off to handle the larger issue.

Data and his team meet Dr. Graves, a bombastic eccentric, and his beautiful young assistant Kareen, whom he has practically raised. Graves learns that he is dying and has only a few days to live. As he grapples with this news, he takes a keen interest in Data and tells him that he was a mentor to Dr. Soong, Data's creator, making Graves a "grandpa" to Data. He then shares with Data his plan to cheat death by copying his mind into a computer. Moments later, Data emerges and informs the away team that Graves is dead.

Back aboard the Enterprise, Picard notices that Data is acting strangely, going on at some length about how awesome Dr. Graves was and behaving very possessively of Kareen. Picard orders him to Engineering to have a diagnostic run on him, but Geordi can’t find anything wrong with him. Having nothing else to try, he has Counselor Troi run a psychological exam on him. Sure enough, she comes back announcing that there is an outside personality inside Data’s head.

Data approaches Kareen and tells her that he is indeed Ira Graves. He declares his love for her, and what better way to prove it than to tell her his plans for turning her into an android too? When she refuses, he accidentally crushes her hand and retreats to Engineering to sulk. Picard finds him there with Geordi unconscious at his feet. Picard demands that Graves relinquish Data's body. In rage, Graves punches Picard, knocking him out. Realizing that he's unable to handle life as an android, Graves transfers his mind into the ship’s computer. Kareen leaves the ship to start her new life, and Data's old self is returned.

To Know Him Was To Love Him

In "The Schizoid Man," Data gives a passionate eulogy for the scientist Ira Graves, "a man of limitless accomplishments and unbridled modesty." Thing is, Data's android body has been taken over by the consciousness of Graves himself, but nobody else yet knows this.

Example of:
But He Sounds Handsome

To Know Him Was To Love Him

In "The Schizoid Man," Data gives a passionate eulogy for the scientist Ira Graves, "a man of limitless accomplishments and unbridled modesty." Thing is, Data's android body has been taken over by the consciousness of Graves himself, but nobody else yet knows this.