Recap / Star Trek: The Next Generation S2E4 "The Outrageous Okona" 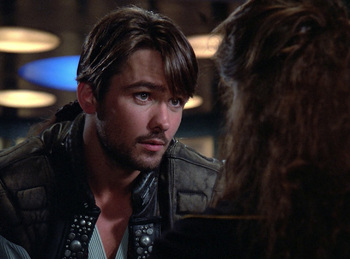 Meet Okona. Everyone loves him. Just ask the screenwriters!
Advertisement:

The Enterprise heads to the Omega Sagitta system, where a pair of twin planets are living under a precarious peace treaty with each other. They unexpectedly encounter a broken down cargo ship with a single person on board. That person is the irreverent Captain Okona (Billy Campbell). Picard offers to beam Okona aboard while a maintenance crew repairs his ship.

Okona lays the charm on thick with the crew, especially the ladies, causing Data to grapple with the fact that he doesn't find Okona's jokes, or any humor in general, to be funny. Data seeks Guinan for guidance, and she recommends that he study up with a computer. He enlists the holodeck for guidance, calling up a hologram of "the greatest comedian ever," a 23rd century comic played by Joe Piscopo. Data tries out some routines he's learned from the comic, but Guinan still isn't laughing.

Meanwhile, the Enterprise encounters a ship from planet Atlec, which prepares to fire on them with lasers. Picard finds their weapons so laughable he actually drops the main shields just to mock them, at which point the captain of the vessel demands he turn over Okona for knocking up his daughter. A second ship, this one from planet Straleb, appears, also demanding Okona be handed over for stealing a valuable jewel. Picard realizes that whichever captain he gives Okona, the other will start a war over it.

Picard opts to finish repairing Okona's ship and let him fend for himself, but Okona instead invites both ship captains to the Enterprise to sort things out. The whole incident turns out to be a silly misunderstanding – the son of the Straleb captain had impregnated the daughter of the Atlec captain and asked Okona to give her the jewel as a marriage offering. Everyone makes up and has a good laugh... even Data, who finally manages to accidentally tell a proper joke.