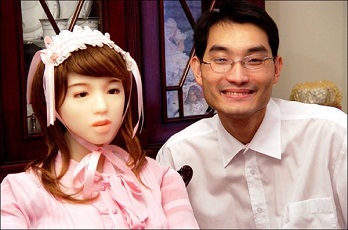 "I will not harm you, nor by inaction allow you to come to harm, so long as we both shall live."
"Ah, a match made in heaven is nothing compared to a match made in the lab."
— Doctor Ivo Robotnik, Adventures of Sonic the Hedgehog
Advertisement:

An extreme form of Kiss Me, I'm Virtual, in which a (usually male) character, often a Mad Scientist, is married to a Ridiculously Human Robot. If the character does happen to be a Mad Scientist, expect him to have created his robotic wife specifically for this purpose.

Such a marriage is usually portrayed as sexist, void of any real love, and often downright squicky, unless you're into that sort of thing. In most of these marriages, it's implied that the primary factor in their "relationship" is that she provides sex, cooking, and housework without arguing, having opinions, or expecting anything in return. Ergo, most men with robot wives are usually portrayed pretty darn unsympathetically.

Sometimes touches upon the themes of a Replacement Goldfish, and can even involve Robosexual. Robo Ship often ends this way.

Note: Most of the Unfortunate Implications of this trope are reserved for when the human deliberately builds or purchases the Robotic Spouse; if the robot is a separate, fully sapient being and the human had to court them the old-fashioned way, it's A-OK.

The title is the politically correct version of this trope; robotic spouses are usually robot wives.