Does Not Know His Own Strength 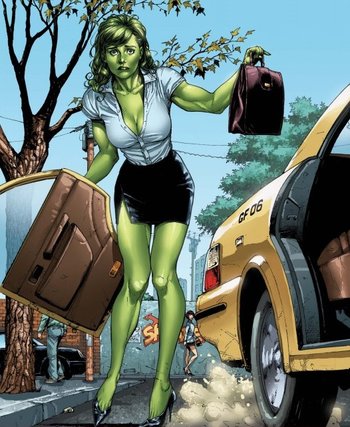 After you gain Super Strength, one of the first things that happens is that you lack the dexterity and sensitivity to know when or how much of your super strength is being applied. Consequently, when trying to go about your daily grind, you accidentally break almost anything in your hands from pulling or squeezing too hard (that could include important levers or other people's hands). Jars and cups explode from the slightest squeeze, you burst through doors and windows, your shoulders chip at entrances/egresses and at worst, you cause severe damage to important facilities or even living beings. The toughest objects are brittle in your super-strong hands and you have to be extra delicate with how you hold or lift things. This is one of the most Omnipresent gags in the medium of superpowers as one of the missing Required Secondary Powers that has to be re-learned and remembered for daily functioning.

Normally, it only happens to folks who gain Super Strength, not characters born with it and who had it all their life. After all, in real life an Olympic athlete that can lift several times his own weight can also pick up a caterpillar without squishing it and it would create all sorts of Fridge Logic to see characters with long-established super strength constantly smashing plates or bottles and not wonder how they ever managed to feed themselves without learning how to control their power. The one major exception to this is if they're from a place (whether it's another planet, an alternate reality, or a Hidden Elf Village) where everyone is that strong, so things like doorknobs and coffee cups are built to withstand being used by individuals capable of crumpling steel with their bare hands and they're not used to how comparatively flimsy everything is on Earth.

This trope is related to Blessed with Suck but is specific to strength and to powers which resemble strength (e.g. the ability to crush objects via telekinesis). It works as a trade-off where the massive raw power that's great for a battle makes Mundane tasks hell to perform. Another variation involves Functional Magic or Psychic Powers, where a mage or telekinetic with the power to decimate armies must do chores by hand, because the spellcaster lacks enough fine control over those powers. After all, incinerating enemies with "too much fire" isn't really a problem, but burning dinner with "too much fire" is.

If the hero's family is unaware of the hero's new powers, undoubtedly the blame for the damage will fall on 'shoddy construction' or on another house member's bad attempts at DIY.

A frequent and more realistic variation of this is that the hero is able to control their strength, but when tempers flare or the hero is startled (or otherwise incapacitated, or perhaps inebriated) that control quickly lapses.

A Sub-Trope of How Do I Shot Web?.

Compare And Call Him "George", when it happens to (formerly) living things, and Afraid of Their Own Strength. Related to Power Incontinence. Could be called the inverse of Gentle Giant. Bears some relation with Casually Powerful Giant. Can overlap with Unskilled, but Strong. This also plays a part in Man of Steel, Woman of Kleenex situations.

Example of:
"Test Your Strength" Game