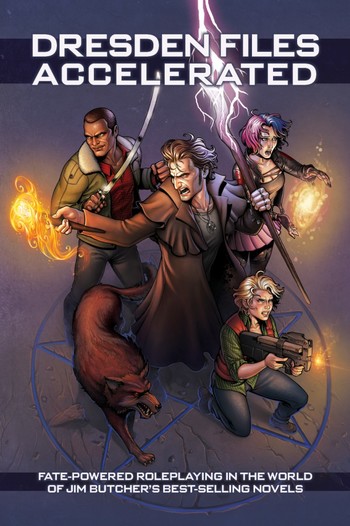 The Dresden Files Role-Playing Game (DFRPG) is Evil Hat's Tabletop RPG adaptation of the popular Urban Fantasy series of novels. After the events of Small Favor, Billy Borden and the Alphas have set out to make a monster-slaying manual for the 21st Century with the help of Harry Dresden, framing it as a roleplaying game so that people who are unaware of the supernatural won't reject it outright. Their efforts produce two mud-splattered spiral-bound rough drafts with Harry, Billy, and Harry's spirit friend Bob having conversations in the margins and on sticky notes about the rules, the setting, and whatever else happens to pop into their heads. The resulting commentary manages to be simultaneously informative and side-splittingly hilarious, making the books a worthwhile read even for those not interested in playing the game.

Under the hood, the DFRPG uses the Fate 3.0 rules originally seen in Spirit of the Century—in fact, that game was created to test Evil Hat's third edition of Fate in preparation for this outing while it was stuck in Development Hell due to continual tweaking. As a Fate 3.0 game, the DFRPG mechanically rewards people for roleplaying their characters' traits ("Aspects") for good (granting rerolls or bonuses) or ill (giving you the Fate Points you need to power those rerolls and bonuses). Additionally, it focuses more on replicating the feel of a supernatural adventure novel than on faithfully modeling reality, allowing players to use their Fate Points or skills to cause a Contrived Coincidence to aid (or hinder!) the party. Aside from adding supernatural powers to replace the mad science from Spirit of the Century, The Dresden Files RPG also standardized (and lowered) the power level of non-magical characters, avoiding the feeling of Player Character invincibility that plagued its predecessor.

The initial two volumes, Your Story and Our World, provide rules, advice, and setting/character information based upon The Dresden Files up to Small Favor. A 2015 follow-up book, The Paranet Papers, adds rules expansions and updated setting information from Turn Coat and Changes, as well as suggestions for alternate campaign styles (small-town, historical, on the road). In 2017 came out The Dresden Files Accelerated RPG, a lighter version of the old game with a simplified system and more new contents, built up to Skin Game with Ivy and Kincaid taking over for Billy and Harry.