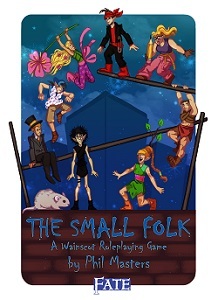 The Small Folk is a tabletop roleplaying game by Phil Masters, self-published in 2015, which uses a version of the Fate Game System (under the terms of the Open Gaming License). The setting material is an expanded and adapted version of a chapter which appeared in Dreaming Cities, a supplement for Guardians of Order's "Tri-Stat" Game System, which appeared in 2005 before Guardians of Order went out of business. Cover and interior art (new for this version of the material) is by Steve Stiv.
Advertisement:

The game is described as "Wainscot Urban Fantasy"; it is set in the modern world, but the PCs are "Small Folk", (very) tiny humanoids who live behind the walls and in the undergrowth. They are descended from The Fair Folk of legend, who were in fact psychic projections of the human racial unconscious, but they were always small, and now they have gone into hiding as the world has moved on. They live largely by scavenging the by-products of human society.

Small Folk society is divided into seven "cliques" — boggarts, brownies, goblins, gremlins, knockers, pixies, and sprites — who like to think of themselves as distinct species, but who are really just socio-cultural groups. This doesn't prevent them from engaging in a little Fantastic Racism. There are also a few "cliqueless", because some people just never will fit in. Each clique has a couple of magical "charms" — special abilities that they call their own. Campaigns can involve preserving secrecy, engaging in small-scale politics, investigating mysteries, or conditioning young predatory animals not to attack Small Folk.

The game is sold in digital form from the Warehouse 23 online store,

and in digital and print-on-demand forms from DriveThru RPG.

The Small Folk provides examples of: