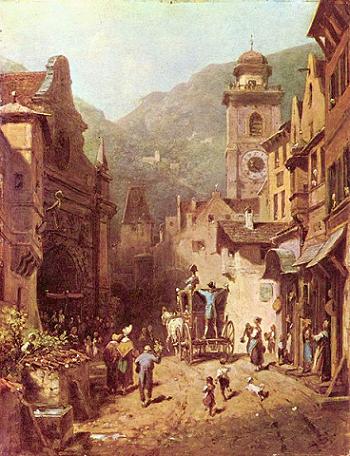 Image by Carl Spitzweg
"There are eight million stories in the Naked City. This has been one of them."
— Tag line for the TV show Naked City
Advertisement:

The City: full of people, tall buildings, and limited parking (except for our heroes).

You're more likely to be the victim of a crime, so this is where most Crime and Punishment Series are set. When a Sitcom is set here, it tends to feature a younger, hipper crowd than the usual Dom Com. People are also more cynical in The City, and the Deadpan Snarker abounds. There is also public transportation, which is a good place to get Post-Robbery Trauma. Combine with a bit of dystopian political corruption and a Rogues Gallery of unrepentant lawbreakers, and it's the perfect place for the Superhero to set up shop.

In the land of television, The City is also full of really big apartments which even a twentysomething who's just starting out professionally can totally afford.

A few cities have their own special quirks (especially CSI's Las Vegas). For the most part, The City will feature sprawling central business districts, vibrant ethnic neighborhoods, industrial zones and decaying ghettos.

Note that the distinction between The City and Suburbia is not always clear-cut; many shows set in The City might deal more with the residential neighborhoods, making it feel like Suburbia with rowhouses (Full House, The Cosby Show, Family Matters). And sometimes the residential neighborhoods, while 100% within the city limits, will have detached single-family homes that aren't even rowhouses and look even more indistinguishable from the suburbs. The go-to city for this is Los Angeles due to its sprawling nature. At the other end of the spectrum, a show set officially in Suburbia may show an assortment of local businesses, events, and institutions that you would typically only find in a city (The Simpsons, Buffy the Vampire Slayer). However, these towns tend to be fictional; Springfield in particular tends to go from largish city to suburb depending on the needs of the episode.

The peculiar interplay of aspects of Suburbia and The City in the real-world city of Baltimore, Maryland (rural sensibilities + high population density = wacky crime) has made it a popular choice in recent years for Crime and Punishment Series (Homicide: Life on the Street, The Wire). While not primarily a cop show, police work typically figures into the B-plots of Joan of Arcadia, which is set in a fictionalized version of the real-life Baltimore suburb of Arcadia. Of course, it doesn't hurt that the Joss Whedon of detective/crime shows is a Baltimore native who wrote a number of non-fiction works that many of those shows are directly based on.