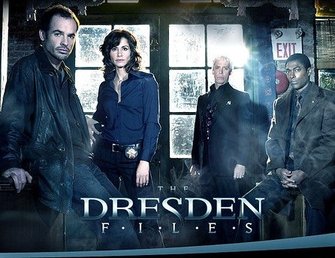 A TV adaption of The Dresden Files.

Harry Blackstone Copperfield Dresden (Paul Blackthorne) is Chicago's only practicing professional wizard, solving supernatural mysteries to pay the bills, and occasionally helping out the Special Investigations unit of the Chicago PD, led by Constanza "Connie" Murphy (Valerie Cruz). He's assisted by Hrothbert of Bainbridge (Terrence Mann), or Bob, the ghost of a medieval wizard who was condemned to his own skull as punishment for breaking the Laws of Magic.

Other characters include Bianca (Joanne Kelly), the sexy vampiress in charge of one of Chicago's more illicit establishments; Kirmani (Raoul Bhaneja), a skeptical cop working under Murphy; and Morgan (Conrad Coates), the High Council's chief enforcer, who hounds Harry, believing him to be a warlock waiting to happen.

It was aired on the Sci Fi Channel in 2007 and lasted twelve episodes before being canceled.