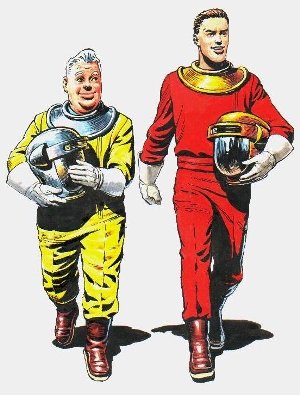 The Doctor: Bless. I'll have to trade her in. Do you need anyone? She's very good at tea. Well, I say very good, I mean not bad. Well, I say not bad... Anyway, lead on! Allons-y. But not too fast, her ankle's going.
Jackie: [sotto] I'll show you where my ankle's going!
— Doctor Who, "Army of Ghosts"
Advertisement:

Because we expect an older character to have more experience, a sidekick older than the main hero is a rare thing. Outside traditional Super Hero comics, there are several reasons to use them.

One is that the older character won't fall out of the Competence Zone because they're under the direction of the younger hero, and thus doesn't undermine their maturity. If the relationship is close, the sidekick's more adult qualities actually fulfill some kind of parental role, which the hero might lack from having no family, without being intrusive. On the other hand, the Older Sidekick can be a non-threatening (yet incredibly appealing) fantasy object for the audience, who identifies with the main hero. A variant of this is when the younger character leads due to rank or status but requires the more experienced sidekick for advice. A typical example of this would be Captain Smooth and Sergeant Rough.

Another is that the main character may be too young or small to possess much physical power. Their expertise lies elsewhere, thus the Older Sidekick also is the Battle Butler who goes everywhere the main character does, instead of merely staying home and minding the house. Often, in these cases, there only appears to be an age difference, or the age difference is the opposite of what it appears so it's not as hard to justify them hanging around each other.

A related dynamic is when the two characters have an (increasingly) equal partnership, but there's just enough of an age difference to inspire protective feelings in the older one. Usually both characters are designed to appeal to different segments of the fandom, and the story will end up using many designs that appeal to shippers (compare Seme and Uke). Think of it as a more intimate version of the Buddy Cop dynamic.

In fact, the Older Sidekick is very handy for lessening the perceived squick of shipping the characters, as the audience seem much more willing to rationalize that the characters are on equal grounds.

Compare More Senior Subordinate, where an experienced character takes a supporting role within an organization, allowing a less experienced (but perhaps more capable) one to assume leadership.